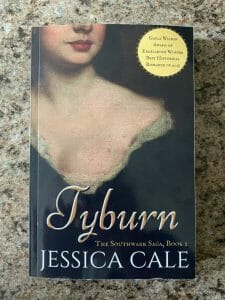 Caught between a new love and an old need for revenge, notorious harlot Sally Green fights for survival in Restoration London. A sinister nobleman, a tutor with a secret, danger around every corner, and unbridled passion … Jessica Cale is pleased to present Tyburn, Book 1 of her new historical romance series, The Southwark Saga.

Sally Green is about to die.

She sees Death in the streets. She can taste it in her gin. She can feel it in the very walls of the ramshackle brothel where she is kept to satisfy the perversions of the wealthy. She had come to London as a runaway in search of her Cavalier father. Instead, she found Wrath, a sadistic nobleman determined to use her to fulfill a sinister ambition. As the last of her friends are murdered one by one, survival hinges on escape.

Nick Virtue is a tutor with a secret. By night he operates as a highwayman, relieving nobles of their riches to further his brother’s criminal enterprise. It’s a difficult balance at the best of times, and any day that doesn’t end in a noose is a good one. Saving Sally means risking his reputation, and may end up costing him his life.

As a brutal attack throws them together, Sally finds she has been given a second chance. She is torn between the tutor and the highwayman, but knows she can have neither. Love is an unwanted complication while Wrath haunts the streets. Nick holds the key to Wrath’s identity, and Sally will risk everything to bring him to justice.

Unless the gallows take her first.