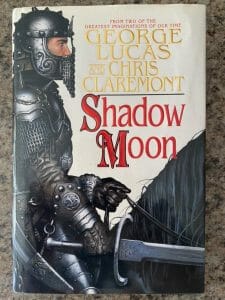 From two of the greatest imaginations of our time comes a magnificent novel of adventure and magic…SHADOW MOON: First in the Chronicles of the Shadow War.

The genius of Star Wars(r) creator George Lucas and the vision of Chris Claremont, the author of the phenomenally bestselling The Uncanny X-Menadventures, merge in what must be the fantasy event of the year.

In Shadow Moon, war and chaos have gripped the land of Tir Asleen. An ancient prophecy reveals one hope: a savior princess who will ascend to the throne when the time is right.  But first, a Nelwyn wanderer must face forces of unimaginable malevolence and dangerous, forbidden rites of necromancy that
could bring back a powerful warrior from soulless sleep.

George Lucas reshaped filmmaking in the ’70s and ’80s with his Star Wars and Indiana Jones films.  When Bantam Books asked Lucas if he had any stories he would like to develop as novels rather than as films, Lucas turned to his 1988 fantasy film, Willow.

“When I wrote the story for Willow, I began with the pre-story,” Lucas said, “but the full story was yet to be told.”

Now, Lucas’s vision is being fulfilled with the talented help of Chris Claremont. Having previously taken the reins of what was for a decade the bestselling comic in the western hemisphere (The Uncanny X-Men) Claremont assumes the responsibility of foster parent to Lucas’s creation.