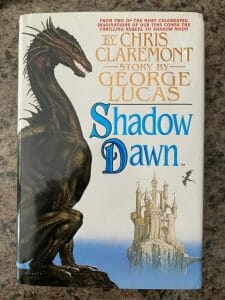 From George Lucas, creator of Star Wars(r) and Indiana Jones, and Chris Claremont, author of the bestselling X-Men adventures, comes the thrilling sequel to “Shadow Moon,” taking readers deeper into a stunningly original world of magic, myth, and legend.

The momentous Ascension of Princess Elora Danan should have brought peace to the Thirteen Realms. Instead, an intense Shadow War rages, spearheaded by the evil Mohdri. He has dispatched his dread Black Rose commando assassins to capture Elora and her sworn protector, Thorn Drumheller. But Mohdri himself is just a facade for a more dangerous entity: the Deceiver. But who–or what–is the Deceiver? And how can Elora, Thorn, and their ragtag band defeat this unspeakable force? The answer lies in a perilous journey to a land undisturbed since the dawn of time. A journey that will end at the unbreachable citadel of the dragon, where a chilling betrayal will change the fate of Elora, Thorn, and the Thirteen Realms forever.