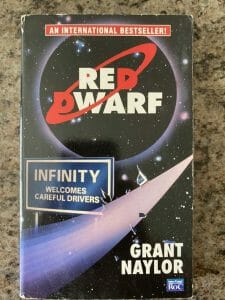 The first lesson Lister learned about space travel was you should never try it. But Lister didn’t have a choice. All he remembered was going on a birthday celebration pub crawl through London. When he came to his senses again, with nothing in his pockets but a passport in the name of Emily Berkenstein.

So he did the only thing he could. Amazed to discover they would actually hire him, he joined the space corps—-and found himself aboard Red Dwarf, a spaceship as big as a small city that, six or seven years from now, would get him back to Earth. What Lister couldn’t forsee was that he’d inadvertently signed up for a one–way jaunt three million years into the future—a future which would see him the last living member of the human race, with only a hologram crew mate and a highly evolved cat for company. Of course, that was before the ship broke the light barrier and things began to get really weird…