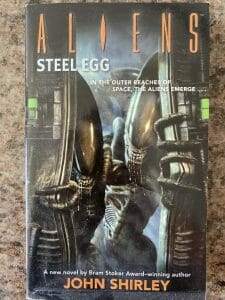 Before Ripley, there was a first encounter. Someone on Earth knew about the aliens. Someone battled them, and survived. Aliens and humans have fought before.

When a human spaceship discovers a vast egg-shaped vessel in Saturn’s orbit, they zero in to investigate the anomaly. They force their way aboard, finding evidence of an advanced civilization of peaceful creatures, now eradicated by an unknown foe. Three teams split up to explore the ship. But already the aliens have awoken. The first of all the battles unfold…

Best-selling writer John Shirley transports you to the origin of the nightmare, before humans knew what they were up against, or how low the odds for survival are.