This Must Be the Place: The Adventures of Talking Heads in the Twentieth Century 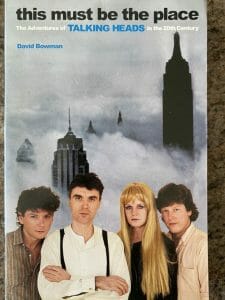 A fascinating glimpse behind the big suits and deadpan looks to the heart and soul of a band that made it big by playing it cool With their minimalist beats, sophisticated lyrics, and stoic mien, the Talking Heads were indisputably one of the most influential and intriguing bands of their time. Rising from the ashes of punk and the smoldering embers of the disco inferno, they effectively straddled the boundaries between critical and commercial success as few other groups did, with music you could deconstruct and dance to at the same time.

Culture critic David Bowman tells the fascinating story of how this brain trust of talented musicians turned pop music on its head. From the band’s inception at the Rhode Island School of Design to their first big gig opening for the Ramones at CBGB, from their prominence in the worlds of art and fashion to the clash of egos and ideals that left them angry, jealous, and ready to call it quits, Bowman closely chronicles the rise and fall of a stunningly original and gloriously dysfunctional rock ‘n’ roll band that stayed together longer than anyone thought possible, and left a legacy that influences artists to this day.