The Ultimate History of the ’80s Teen Movie: Fast Times at Ridgemont High Sixteen Candles Revenge of the Nerds the Karate Kid the Breakfast Club Footloose Dead Poets Society and Everything in Between 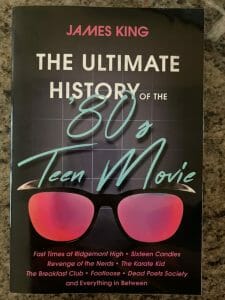 A trip back to the era of troubled teens and awesome soundtracks; of Reagan, rap, and Ridgemont High; of MTV, VHS, and “Axel F”; of outsiders, lost boys, and dead poets; of Bill and Ted, Brooke Shields, and the Brat Pack; of three Porky’s flicks, two Coreys, and one summer when “Baby” refused to be put in a corner.

The Ultimate History of the ’80s Teen Movie goes behind the scenes of a genre where cult hits mingled with studio blockbusters, where giants like Spielberg and Coppola rubbed shoulders with baby-faced first-timers, and where future superstars Sean, Demi, and Tom all got their big break. Music, comedy, and politics all play a part in the surprisingly complex history of the ’80s teen movie. And while the films might have been aimed primarily at adolescents, the best tackle universal issues and remain relevant to all ages.
From a late ’70s Hollywood influx to an early ’90s indie scene that gave youth cinema a timely reboot, film expert James King highlights the personal struggles, the social changes, and the boardroom shake-ups that produced an iconic time in movie history.