Speech Police: The Global Struggle to Govern the Internet 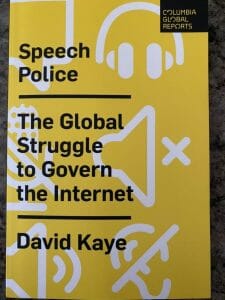 The author has produced a brief yet impactful work about the internet and efforts to control such expressions as hate speech and advocacy of terrorism. Kaye analyzes several examples of how online content producers are targeted for varied reasons, how platforms such as YouTube and Facebook have attempted to police forms of content on their servers, and how the culture of responsibility for Internet governance has shifted in the past last years. Kaye also covers fake news and the increased efforts by platforms such as Twitter and Facebook to root out these posts via automation–specifically AI. At the same time, Kaye brilliantly layers analysis of the politicization of content on platforms and the growth of efforts, mostly in Europe, to regulate these private, mostly American companies. All the while, Kaye makes sure readers are aware of the complexities and how free speech may be embattled if some of these regulations are put into effect at scale.