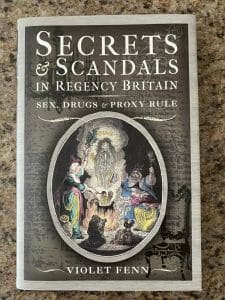 This book takes an entertaining peek at the secrets and scandals of Regency Britain, a period in which the heir to the throne was making merry with his mistress whilst his ailing father attempted to keep a grip on both his crown and his finances. From Princess Caraboo to the Peterloo Massacre, the Regency was a period of immense upheaval in both personal and public lives as well as in politics. We’ll see how the advent of the modern media brought ‘spin’ to scandal and focus on stories of those people and events who encapsulated the age.